Holocaustanism is a new jewish religion of the 20th century, based on the worship of the fictional 6 million jewish great martyrs who allegedly perished in mythical gas chambers, stoves, etc. Although such a number of Jews at that time could not exist on the territory of even the whole of Europe, not to mention the territory of the Nazi Germany, on which at the time lived only 200 thousand jews. But nevertheless, thanks to expensive propaganda and promotion, the cult has successfully developed and is still the current and most prevalent religious cult of today’s Europe after pisslam.

Let’s see if it is so different to islam, and what is the main relic and object of the worship of this cult.

Monument to the holyhoax in Brno has a form of perfect cube, see the image of it below:

As you can see from above, holyhoax is a religion. Perfect Abrahamic one: it has martyrs, it has a cube and it has piligrimages. Slavish worship, worship of suffering, pain and death – all perfect qualities of Abrahamic religion. 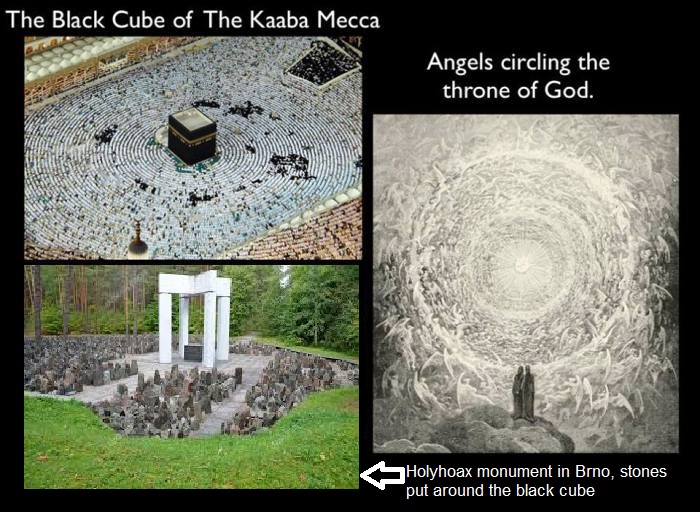 According to the bible, the kingdom of God has the shape of a cube of 15x15x15 (miles). 3 measurements: width, height, depth. 1 + 5 = 6. 15 billion years ago, according to another Jewish legend, there was a Big Bang. 1 + 5 = 6. 6 cube faces, 6 is the Big Bang number, and 6 million Jews. Numerologically, holocaustans, materialists, christians and mudslims worship the same thing. It’s no wonder that European xians and holyhoaxians are so tolerant to islam and it’s so easy to go from one to another.

Islam, christianity, materialism and holyhoax are united in one – the cube, which is racial jewish soul. They all worship the Jew.