The Jews write in their own texts that Saturday is the day for cursing and connecting with and sending thought forms against the Gentile enemy. Saturn is the day for cursing in Judaism. What do you think they are doing in their Synagogues on Saturday on their Sabbath. Reciting the numerous curses against Gentiles in their Torah which is Jewish witchcraft. This is why the Roman and Greek rulers banned the Jews from reciting the Torah and burned the Torah scrolls. As this is when Gentiles still had our spiritual knowledge and knew what the Torah was. Which is why the Jews invented Christianity and Islam to remove spiritual knowledge from the Gentiles and yoke them to the Jewish agenda.

The mainstay of Jewish magic is very simple. The Jewish magician connects with the matrix of energy the Jews have created [YHWH] and which they command. By using different methods that involve using the 72 names or other Hebrew names of power along with talisman’s, and other methods to then direct the energy of their matrix to accomplish what the Jewish black magician wants. The Gentiles are the ones paying for them to do this as they are infusing this energy matrix for the Jews to do this via Christianity and Islam. YHWH is a large matrix of energy that vampires the Gentiles connected into it.

The most important ritual device in Judaism is the Tefillin.

The Tefillin the Jews wear is a method of binding them into and connecting into the Jewish matrix of energy to infuse this and direct it. They bind the one on the arm with seven straps the number of Saturn and the Tefillin is made to represent the black cube of Saturn. And is infused with Jewish prayer scrolls in Hebrew that are inserted into the Tefillin. The Hebrew letters are charged as talisman’s as the Rabbi’s mention to connect with and bring the energy of their thoughtfrom [YHWH] into the material from the astral. The main prayer contained within the Tefillin is the Sh’ma prayer which binds the Jews with their thoughform making them one. The two Tefillin boxes and how they are worn are based on the ten worlds in kabala. Which is how “God” created by the ten statements of creation which is in Genesis and the ten worlds represent. The cube worn on the head is design to connect into the Ajna chakra which in Kabala is shown as the letter Vav and relates to the sixth day of creation. Six is the number of manifesting things into the material world. The Ajna is the “Command Wheel” in Hinduism where most of the Kabala is stolen and corrupted from. As the Ajna is called the Mind chakra hence Command wheel. Its the conscious will to direct and program the energy of a ritual working. 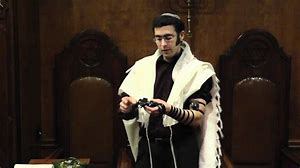 The Shin letter with the four prongs placed on the box worn on the head is symbolic of the brain in kabala. The upper three worlds on the tree which the Shin represents. Fire is also the element of creation and related to mind. As people create first with the mind. This all relates to the magician using their mind to direct and program the energy. Not to a man in the sky.

The Tefillin on the arm is worn on the left arm which is the female side in kabala, Shekinah on the tree and relates to spiritual power while the head is the mind that directs the power. Shiva and Shakti. Which is where the Jews stole the Yeshiva from. Their schools the intellect of the mind. And the concept of God and Shekinah. The arm and the hand is also symbolic of the spine in Judaism the Shakti power that is lead up the spine and directed out the third eye to accomplish workings. In the east Shiva directs fire out the third eye to bring things to action. Shin is a Sanskrit letter and is the fire element in Hinduism. The seven straps are the lower seven worlds which are the chakra’s along the spine in kabala. With the other box being the other three worlds which relate to the trine parts of the brain. Chokmah the right side of the brain, Binah the left and Keter the optic thalamus. Which is shown as the Eye of Ra in Egypt.

The practice of “doving” the Jews perform while wearing the Teffin. Doving being were the Jews rock back and forth and side to side while praying is a technique to activate Shakti energy at the base of the spine and bring it up to the head. They call this copulating with the Shekinah for this reason. This also exists in the east. There are whole kabala texts full of Yogic postures, breathing techniques and mundra’s. All stolen from the east.

The Jews even stole the Tefillin from the east. Its still worn by Shinto Priests in their rituals in Japan. And its called the “square inch” in Hinduism which relates to the third eye. Which is about the size of the Tefillin worn on the head.

The enemy has also created a materialistic world system where physical money has become the artificial energy system that controls the planet. By building an artificial social order based on wealth and nothing else. This allows the Jews to stay in control and own the Gentiles. Everything the Jews have created socially is based on the consciousness of the lower octave of the planet Saturn. The same why the Jews run their criminal international banking system is how they run their matrix of energy YHWH. Vampirism.