There were many royal groups in Europe at this time that were interconnected with the Templar Order which was made up the European royals and general aristocracy. The Templar’s were Satanists. They maintained the ancient Aryan religion in which the head God from Sumeria to India to Europe is called “Satan” [meaning The God Eternal]. The Templar’s had also been formed by the Pagan Nobility of Europe in the Levant after they came together to push the Mohammedians out of the Levant to created a needed military buffer zone to halt the waves of attacks coming from Islam. Which it did for several centuries.

The Templar’s were Satanists:
http://www.thirdsex666.josru.com/the-templars-serpent-tradition/

“In 1431, at the fortress of Sighisoara in Romanian, Vlad III was born into the Wallachian princely House of Barsarab the Great (1310-52). Vlad’s father, Prince Vlad II of Wallachia, was the appointed military governor of Transylvania and on 8 February ( in the year of his son’s birth) he was inducted into the Society of the Dragon by Zsigmond von Luxembourg, King of Hungary. This installation was directly responsible for the Vlad III (who inherited the Dragon office at his father’s pledge) becoming ‘Dracula’ (son of the Dragon). The original fraternity that was resurrected to become the Hungarian Society of the Dragon can first be identified as the Dragon Court of ancient Egypt under the patronage of the priest-prince Ankhfn-Khonsu in about 2170 BC….The Court provided a foundation for priestly pursuits associated with the teaching of Thoth…”

“Having inherited the ancient legacy in 1397 [ my note King Zsigmond of Hungary] drew up a pact with twenty-three royals and nobles who swore to observe’ true and pure fraternity’ within the Societas Draconis (Society of the Dragon).”

“Along with Zsigmond, other officers of the Court were his wife Barbra Cilli (daughter of Duke Hermann II of Styria) and their daughter Elizabeth, thereby achieving the traditional overall standard of twenty-six member (two covens of thirteen). Others prominent in the Societas Draconis were King Jagello of Poland, King Alfonse V of Aragon, Grand Prince Vitovd of Lithuania, and Duke Ernest of Austria, also with Christopher III Duke of Bavaria and King of Denmark, Sweden and Norway. . Later, in 1439, Thomas de Mowbray, England’s Duke of Norfolk, was admitted to the Order.”

Note their symbol is the ancient image of the Dragon who is always given the Devil, Satan in the Christian religion. The Rose Cross was originally what the Templar’s renamed themselves in England and ruled the English Court in the Steward period. Francis Bacon was the Grand Master of the Rose Cross.

“The founding document of Zsigmondus dei rex Hungaraie confirmed that members of the Court might wear the insignia of a dragon incurved into a circle, with a red cross-based upon the original emblem of the Rosi-crucis.”

The Rose Cross goes back to the Goddess Isis. Who was the Madonna or Mary of the Templar’s, Meri, Mary was the name of Isis. Isis Mary. This is were the enemy stole their fake Mary from.

“Shortly after this foundation, Zsigmond was crowned Holy Roman Emperor in 1411…Pope Gregory XII was obliged to approve his Emperor’s NON-CATHLOLIC ESTABLISHMENT.”

Vlad had attended the mystery school system in Austria here he graduated in a great ritual called “Riding The Dragon”.

Of this school it was wrote: “This was considered to be a ‘Devils school’. where the secrets of nature, the language of animals and all magical spells are taught.”

Some notes on Vlad. He took over a region in which the Boyar’s the local aristocracy of the land owners. Had sold out to the Turks for power. Had taken the free land ownership of the Peasants and taxed them beyond reason [but kept Church lands tax free] and imposed upon them feudal slavery. The regime of the jew run church. The Boyar’s committed treason by murdering Vlad’s, Father and brother for attempting to morally reform the region and they refused to pay the tax of Romanian children to the Sultan. The Boyar’s probably murdered them on orders from the Sultan. As this move was to protect their own power with the Sultan.

This is why Vlad had them all arrested, most were sentenced to hard labour to pay back what they had stolen from the people. Other’s guilty of treason and murder where executed. Most tales of Vlad such as blood drinking and nonsense were invented by merchants and MONEY-LENDERS from the German regions. Keep in mind this business was dominated by jews and money lending was exclusive a jewish trade. It was banned for non-jews to engage in. Who…jew, would make up tales of blood drinking…..We know which group loves to project on the Goyim after all. This lying propaganda of Vlad’s clamed evil. Was due to the fact Vlad banned their criminal economic rackets in his region. Like how Hitler killed sixty, billion jews, wait the Talmud claims it was the Roman’s who killed sixty billion jews. They took a couple of zero’s off for their Hitler claims….Oy veh! Ashkenazi jews, Ashkenazi means of Germany.

Vlad Dracula is still a beloved hero of his People in Romanian to this day.

Vlad created a new leadership mainly from the common People mainly from those who proved themselves knightly and brave on the battlefields fighting for the People. He brought in schooling, welfare, ended poverty and improved living standards and brought the rule of law by ending political corruption. He also ended the feudal enslavement of the People and gave the people back their property and lands that had been stolen by the Boyars working with the church. This was the Templar mission that lived on into the Free Mason’s before the Zionist Illuminati took over the Mason’s which had before banned jews from being members by law.

Vlad from his own letters stated the reason he used such tactics as impalement against the Turks was because the Turkish forces numbered over 150,000 and his own army maybe 10 to 16,000 at the most. And that from understanding the Turkish mind from being raised as a hostage in their court he needed to break their will to fight. The impalement was a form of execution used in the Turkish court and it held the fear of a Sultan, over the Turk mind.

Vlad also executed the beggar’s after first giving a chance for any man in the kingdom without land or trade to obtain land and trade training for free, and thus end poverty in his kingdom. After this the only ones who stayed beggar’s did such on purpose for criminal reasons. Vlad had them executed because he knew war with the Islamic Empire of the Sultan was coming. He stated all the agent of the Sultan has to do is place a gold coin in the hand of the beggar and the beggar will sit there and spy for the enemy.

Vlad was fighting a desperate war to keep Europe free of Islamic domination. Vlad refused to hand five hundred children of his People over to the Sultan as the boy tax, to be enslaved and raped by the Ottoman’s.

Vlad’s opponent was Mehmed the Conqueror, the Sultan who took Constantinople. And wanted to conqueror Europe for Islam. The Ottoman Empire was an Islamic Caliphate, a Islamic theocracy that was aimed at conquering Europe.

Prince Vlad, refusing the Sultan’s tax, to the Sultan’s officials, legend has it when they insulted him, his People and demanded they had over their children for slavery to the Sultan. Vlad, had them killed by having their turbans nailed to their heads and sent them back to the Sultan as his message. As this refusal was an act of war. But Jihad was coming anyway from the Islamic Empire.

It was Vlad who with a small army totally defeated the entire Islam Jihad against Europe by the Ottoman Empire. When the Sultan finally reached Vlad’s capital from the writings of the Greek historian who was with the Sultan. Upon witnessing the forest of the impaled, some twenty thousand Muslim troops on stakes. The Sultan remarked he couldn’t fight a man who knew so well the mind of the Turks. The Greek historian also wrote, the final battle came that night. Vlad entered the camp with several thousand of his men all dressed in the uniform of the Turk. Vlad slipped by the massive guard into the Sultan’s tent and personally killed the Vizier of the Sultan and then screamed in Turk, the Sultan has been killed and the enemy is in the camp dressed as Turks. His men started attacking the Turks and then slipped out of the camp. By the morning as wrote the historian, when the sun rose it dawned over the bodies of a hundred thousand dead Turks. As the Turks in the chaos started fighting each other.

The Sultan only lived because he switched tents that night. After that what was left of the Turks army not even fifty thousand, ran all the way back to their capital.

Vlad rode to the then Hungarian king who was supposed to be waiting with an army to aid in the battle against the invasion but had spent all the money elsewhere. Vlad was shocked to find there was no Army waiting to fight the Turk. Vlad told the king about the victory and was expecting to use the massive army which was supposed to be there to drive the Turk out of Constantinople and back across the Bosporus, this would have kept the future attacks of the Islamic Jihad’s from the Ottomans out of Europe.

The king put him in jail on false charges. He had no intention of leaving the kingdom and he didn’t raise any army needed to fight the Sultan. Then king spent the money on his wedding. And was also afraid the Austrian Royals might take his throne when gone.

Without Vlad the Satanist Prince and protector of Holy Aryan Europe. The Islamic Sultan would have butchered, burned, raped and enslaved his way though all of Europe and imposed Islam over all of Europe. Vlad was the one leader who fought, when many other leaders made back door deals with the Turks to allow them passage though their lands though Europe.

The banners of the most powerful army on earth, the undefeated Islamic Ottman’s, the very banner of Islam itself fell in defeat before the “Son of the Dragon”. 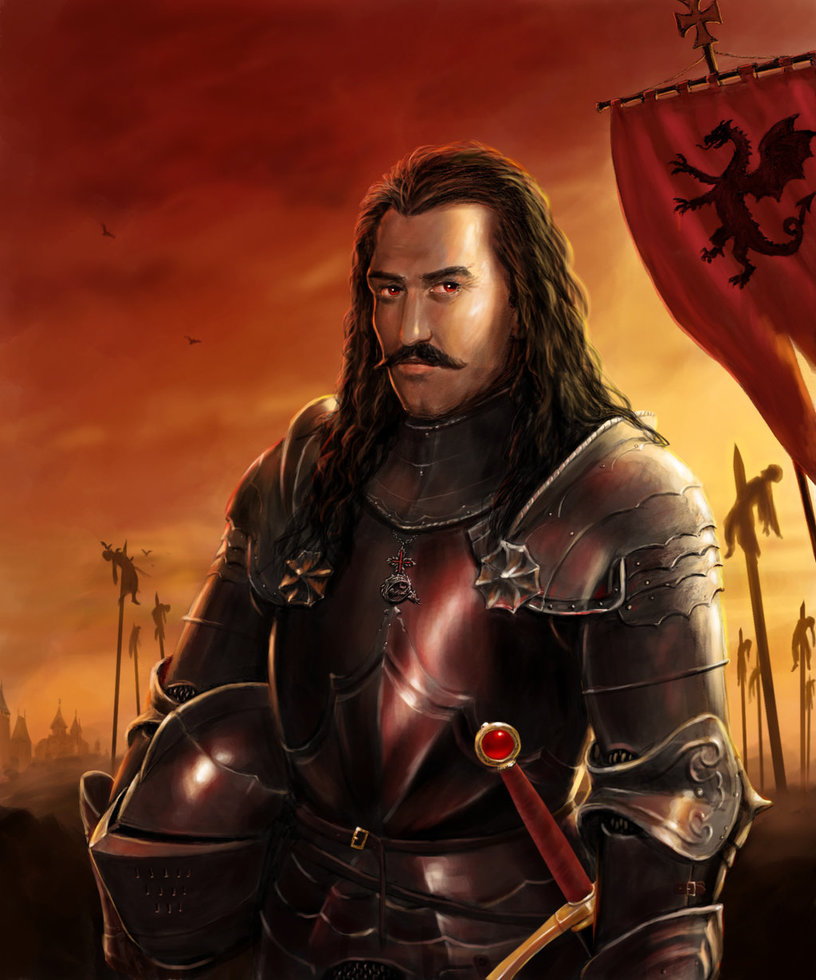 Source:
The Realm Of The Ring Lord, Laurence Gardner