Skip to content
Dedicated to Khaled al-Asaad, who have worked for over 50 years as the head of antiquities in Palmyra and died because refused to tell the jews of Islamic State where hidden treasures were saved from Palmyra. 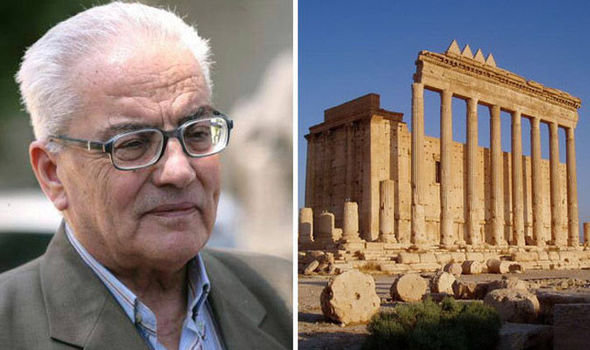 “Just imagine that such a scholar who gave such memorable services to the place and to history would be beheaded … and his corpse still hanging from one of the ancient columns in the centre of a square in Palmyra,” Abdulkarim said. “The continued presence of these criminals in this city is a curse and bad omen on [Palmyra] and every column and every archaeological piece in it.”

“He was a fixture, you can’t write about Palmyra’s history or anything to do with Palmyrian work without mentioning Khaled Asaad,” he said. “It’s like you can’t talk about Egyptology without talking about Howard Carter.

“He had a huge repository of knowledge on the site, and that’s going to be missed. He knew every nook and cranny. That kind of knowledge is irreplaceable, you can’t just buy a book and read it and then have that.

“There’s a certain personal dimension to that knowledge that comes from only having lived that and been so closely involved in it and that’s lost to us forever. We don’t have that anymore.”

“Al-Asaad was a treasure for Syria and the world,” his son-in-law, Khalil Hariri, told the Associated Press. “Why did they kill him? Their systematic campaign seeks to take us back into pre-history. But they will not succeed.”

“A year ago, Dispatches told the story of how children in Africa’s Niger Delta were being denounced by Christian pastors as witches and wizards, and then killed, tortured or abandoned by their own families. Following the introduction of the Child Rights legislation and an increase in financial support for a British charity providing a refuge for affected youngsters, the program returns to find out what happened to some of the people featured in the first film.”

“Twenty- seven year old Ms. Chen Hui and thirty year old Ms. Sun Yan were also tied up in a spread-eagle position as torturers repeatedly thrust long rods into their vaginas as blood ran down their legs. Other objects included toilet and shoe brushes. Other accounts included practitioners being tortured with cattle prods, while being iced with cold water to intensify the pain of the shocks. One woman who was a high profile Falun Gong practitioner had her trachea ripped right out of her throat with no anesthesia in order to make her an example to others who would speak out against these atrocities. She died a slow and painful death.”
http://www.faluninfo.net/torturemethods2/

While mass torture of Falun Gong preservers of Ancient Pagan Chinese Culture by Communist Party of China includes… [Links to the most common tortures featured in great detail]:

While we witness the rise of inquisition type of activity in the Middle East waged by extremist islamic organizations such as Islamic State in Syria and Iraq, and Al-Qaida [aka “Muslim Brotherhood”] in Egypt.

The goal of such activity is the very same that the xian inquisition in Europe of the Middle Age pursued – to wipe our Ancient Pagan [Satanic] Culture from the face of the Earth and genocide its preservers and everyone who knows anything about it and may pass to new generations.

The way they do it is also the very same way all abrahamic lies are enforced: mass torture and full ethnic genocide, like what they are now doing to Yazidi. Yazidi are Pagan / Satanists and ISIS admits the goal of their mass rape of Yazidi women is to stop their bloodlines, i.e. full extinction:

Now, it’s no secret that Jews stand in the head of all inquisition – of the old and of the modern days. Once they created and ruled Catholic Church. Now they rule and operate Muslim Brotherhood and Islamic State.

Jews had long history of trying to destroy Syria and Iraq in any possible way. They nuked them many times behind the curtains, they used USA’s money and people to bomb them under the mask of “promoting democracy”. Their beloved targets were always places of culture: museums, memorials, monuments etc. And civilians. They always tried to destroy something. It was our memory.

Now they have the instrument, which works like a physical presence of Israel in Syria: Islamic State is their hand in the East, which has at last reached their precious target – Palmyra. The fate of Palmyra and her Guardian, Khaled al-Asaad, will be the fate of Europe [the greatest Cultural treasury of the world] if Islamic State is not stopped.

ISIS Blows Up Ancient Temple Of Baal Shamin In Palmyra

August 29, 2015. The Temple of Baal Shamin in Palmyra, built in 17 AD, has been destroyed by IS militants. In videos released by the terrorist Islamic State, fighters can be seen attaching barrels of explosives to its columns, mining the building, and then detonating them in an explosion that reduced most of the temple building to rubble. The complete destruction of the temple was confirmed through a satellite image captured August 29 by Pléiades Earth-observation system, which is managed by Airbus Defense and Space.

Although many of the buildings and colonnades on the ancient Palmyra site are said to be intact, IS has reportedly mined much of the site. According to Syrian cultural sources, almost all the ancient artifacts and sculptures stored in the Palmyra museum had been taken to Damascus to protect them. In June, one of the most famous sculptures from the Palmyra site, the fifteen ton Lion of Allat, which had been relocated to the museum but was too heavy to evacuate, was destroyed by IS, using heavy construction machinery. IS has used the ancient amphitheater of Palmyra for executions, including the horrific murder of the 82 year old former chief archaeologist in Palmyra and the slaying by gun-wielding children of 25 Syrian government soldiers in June. The site museum is reportedly being used as a prison and courtroom.

Baalshamin was one of the two supreme gods and the Sumerian sky god, or god of the heavens of pre-Christian Palmyra in ancient Syria. The earliest version of the temple dated to about 100 BCE. It was rebuilt, enlarged, and extensively decorated in 130-131 AD by Male Agrippa, an important official of the time, at his own expense. The building of the temple was to honor the visit of the Roman Emperor Hadrian to Palmyra in 129 AD. The temple was a fusion of the oriental Syrian tradition and Roman style. It featured Roman capitals and a six-column pronaos, but Syrian elements above the architrave and Egyptianizing acanthus patterning.

While all this, there is something that stands in their way impossible to remove… and it is the reason our Culture is still alive.

Oh, allah, not everything can be destroyed by a bomb! 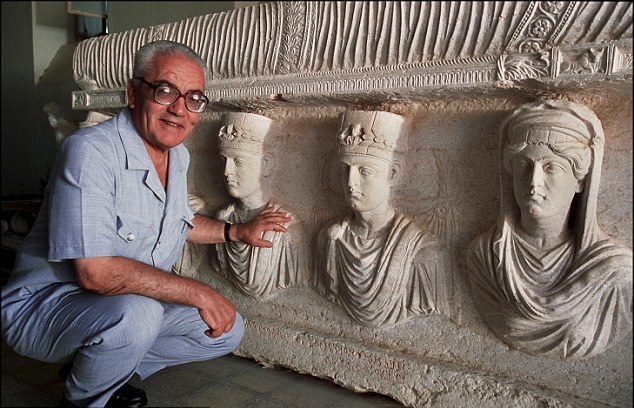 There is something you can never nuke. It is like The Ocean that you can never burn. It is our loyalty to our Pagan roots. We can’t forget our Creator God Satan doesn’t matter how you impose your lies. We will naturally proceed protecting our Aryan Legacy at any cost to ourselves even when not realizing why we are doing so. Only with our death and destruction of all our souls will “Satan’s name be blotted out”. Till there is no one alive Gentile left – our Aryan Culture, our Pagan Religion will live.

(CNN) Khaled al-As’ad spent his life on the painstaking task of preserving antiquities, saving the relics of our ancestors for generations yet to come.

He was working in Palmyra, a Syrian city full of ancient monuments and temples — a city that was, in the second millennium B.C., a caravan stop for people making their way across the desert.

But over the past month al-As’ad, 82, ran into a very modern menace — ISIS, the most brutal terrorist group in recent memory.

And on Tuesday, he was beheaded in the public square of the city whose heritage he had worked so hard to save, said Rami Abdulrahman of the Syrian Observatory for Human Rights.

Al-As’ad, a university professor and the former general manager for antiquities and museums in Palmyra, was decapitated as militants watched, Abdulrahman said, citing al-As’ad’s relatives in the city.

His crime? Refusing to pledge allegiance to ISIS — and refusing, under ISIS interrogation, to reveal the location of archaeological treasures and two chests of gold the terrorists thought were in the city, Syria’s director of the General Department of Antiquities and Museums, Maamoun Abdulkarim, told CNN on Wednesday.

For protecting the antiquities he had spent decades preserving, al-As’ad paid with his life.

When ISIS entered Palmyra in May, Abdulkarim, certain that the terrorists would kill al-As’ad, pleaded with him to leave the city.

“He refused,” Abdulkarim said. “He said, ‘Whatever happens, happens. I cannot go against my conscience.’ He had a very strong personality and refused to yield to anyone.”

Instead, he died in the city where he was born.

ISIS posted a photo of his body on social media sites Wednesday. It was tied to a pole, with the head between the legs.

On the body was a white poster with red letters spelling out in Arabic the word “Heretic.”

“Khaled al-As’ad means Palmyra in the minds of many people,” Moaz said. “He was a great figure, one of the most senior scholars alive in Syria.”

Palmyra, northeast of Damascus, is known as the “bride of the desert” for its exquisite collection of ruins along a historical trade route that once linked Persia, India and China with the Roman Empire.

ISIS seized the city — a UNESCO World Heritage Site dating to the Neolithic era — in May. ISIS fighters destroyed two ancient Muslim shrines and posted photos of the destruction on Facebook, the Syrian government said.

READ MORE: The race to save Syria’s history

Other monuments, temples and historic buildings have been mined, and a statue of a lion at the entrance to Palmyra’s museum has been destroyed.

As it has conquered territory, ISIS has destroyed archaeological sites, claiming that it considers religious shrines idolatrous.

Now, another defender of those sites has been killed.

“The Syrian people are shocked because he represented Syria’s culture and history,” Abdulkarim said. “Regardless of our differences we cannot differ on the character of Khaled al-As’ad.”

WHAT HE HAS SAVED:

“Isis, which follows a puritanical interpretation of Islam, considers maintaining such ancient statues to be apostasy.

According to Syrian state news agency Sana and the UK-based Syrian Observatory for Human Rights, Asaad was beheaded in front of dozens of people on Tuesday in a square outside the town’s museum. His body was then taken to Palmyra’s archaeological site and hung from one of the Roman columns.

Amr al-Azm, a former Syrian antiquities official who ran the country’s science and conservation labs and knew Asaad personally, said the “irreplaceable” scholar was involved in early excavations of Palmyra and the restoration of parts of the city.

“He was a fixture, you can’t write about Palmyra’s history or anything to do with Palmyrian work without mentioning Khaled Asaad,” he said. “It’s like you can’t talk about Egyptology without talking about Howard Carter.

“He had a huge repository of knowledge on the site, and that’s going to be missed. He knew every nook and cranny. That kind of knowledge is irreplaceable, you can’t just buy a book and read it and then have that.

“There’s a certain personal dimension to that knowledge that comes from only having lived that and been so closely involved in it and that’s lost to us forever. We don’t have that anymore.”

Eternal Memory to Palmyra and Her Heroes!!!!